For years now Vancouver based musician Chad Paquet has been working in and out of music.  He is  man of many talents: Chef, Skateboarder and yes Musician. He spent  a number of months in the Philippines as a Chef  in a five star hotel before going back to Canada and marrying his fiancé. Now music found its way back to him and he has been putting up recordings. He started writing songs as early as 2002 and he sent me a link to his first demo under the moniker Redcapped Mannequin. I will be featuring his works from time to time in this blog so watch out. 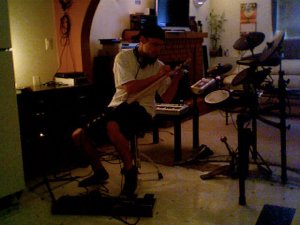 Working in his home studio