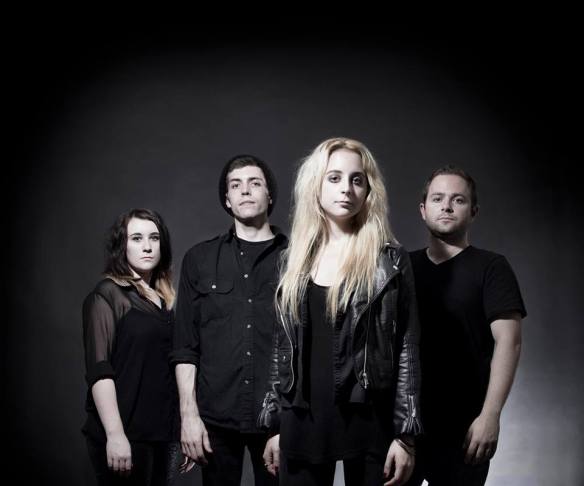 I had a chance to catch up with Canada’s rising rock band Bloody Diamonds. They are touring to promote their new release Monsters 7. We all know that the big country up north has produced world class musicians. So what’s this excitement about Boody Diamonds? I tell you this: My experience with their music is an hour of visceral glory. A kind of aesthetic explosion that seems to come from the depths of your guts as it channels something primal, unsettling but beautiful at the same time. Sara and Jake, the band’s core duo answer questions I asked on your behalf dear readers. They are young, beautiful and full of raw energy. You don’t want the fear of missing out so here they are!

Hard Rock, Bluesy and Dark. These are the three terms that stand out when I listen to your music. How did you decide to combine these elements and attain consistency from the first album They’ve Got Secrets up to the current Monsters 7”?

Jake: We’ve always written rock music, and in my opinion the blues scale simply has all the best notes in it. I don’t care much for major scales. The rest just kind of happened. In the beginning we didn’t aim to be a “dark” band, but it definitely took that shape within the first few songs we played together. We love dirty riffs, crunchy chords, and tasteful dissonance so I guess it was inevitable. There’s consistency from our first album to Monsters, but I feel like the two tracks on the 7” are more focused. We wrote them in a shorter time frame than the songs on the first album, and had more experience playing them live. We recorded our first album after playing just a couple shows. When we went to record Monsters we had a couple of tours playing together under our belt. We actually recorded the Monsters 7” mid tour during a couple days off in Toronto. We had a much better idea of what we wanted to do.

You and Sara have this amazing musical chemistry. How did you two and the rest of the band make it work?

Sara: The two of us write the majority of our songs, it’s just always been that way and what has worked best. Jake has the riffs and I’ve got the voice. Once we have a song written, we have a pretty good sense of what everyone’s parts should be to complete the tune. We bring them to the rest of the band and everything usually falls into place. At this point we can pretty much read each other’s minds, as soon as I start singing a new line Jake knows what to play.

Lady of the Night, She Aint Pretty and Twisted are tracks that would be appropriate for bloody horror flicks. Are you guys big fans of horror films?

Sara: I’m actually horrible at watching horror films. I get way too into it… I don’t sleep for weeks afterwards. I love creepy and dark, but not actual horror. We get this question a lot and it always makes me laugh.

Jake: I don’t watch a lot of movie movies, but I’m big into documentaries, often on horrifying subjects. Does that count?

Halifax is the home of great bands. Is there a fierce musical competition where you came from?

Jake: It’s definitely an interesting scene. There are a lot of really great, hard working bands in this city. So many bands and people we find super inspiring come from our own city which is great. Considering how small Halifax actually is the music and art scenes are incredible. But at the same time it can be very cliquey. Being “cool” is relative. But we don’t really look at this as a competition, it’s our lives. Afterall we play music, not hockey. It’s not like any music fan ever likes one band and one band only anyways.

You are  touring and promoting Monsters 7”. What inspired you to write the title track and also Bright Lights Darling?

Sara: Lyrically, Monsters was inspired by a bit of an overwhelming point in our lives. Dedicating yourself to the musician lifestyle can really take a toll on you, you know. Sometimes you just want to run away, you feel like you’re stuck and have been running around in circles. There’s always people (or “monsters”) telling you what you should and shouldn’t do, it can drive you to insanity. The second verse is more about letting go of it all. There’s always going to be monsters, you just need to learn how to deal with them.

Bright Lights Darling was a bit of therapy for me. Blame sneaks up on you pretty easily. Blaming yourself and other people, it’s easy to do. For me this song is about making mistakes, facing the truth, and then kicking ass. Though following your dreams can result in years of “failure”, it’s real. Living life is a thrill.

October and November will be exciting for the band starting with the Halifax Pop Explosion. Are you nervous? Confident? Impatient?

Jake: It’s our first time playing Pop Explosion so it’s definitely exciting. I wouldn’t say we’re nervous but definitely anxious. I would say I’m more so excited to get back on the road again though. It’s been two months since the last tour but it feels like forever. There needs to be a word for the opposite of home sick, thats what I’m feeling pretty much everyday we’re not on tour.

Jake: For one stop shopping Bandcamp is pretty kick ass. You can listen/download/buy our records all in one place, and you can get other merch there too. But we have an online store on our website, our music is available from iTunes, Amazon, and most other major digital music retailers, and if you live in Eastern Canada our records might just be available at your local independent record store.

What’s the best thing about touring this time of the year?

Sara: There’s a lot of reasons why fall is our favorite time to tour, though spring is a close second. We sleep in our van a lot. Every night to be more specific. Not all of us, but at least one or two. It’s the best/cheapest security system possible. Fall is ideal weather for that! Not too cold, not too hot. The van doesn’t have snow on it when you wake up and the sun isn’t beating on you through the windows at 5am. Sometimes it gets too hot in the summer (yes, even in Canada) and we have to worry about our records warping. Sometimes its too cold in the winter and we have to worry about our gear freezing. Fall and spring are the ideal times for touring Canada. It’s also great weather for boots and leather jackets.