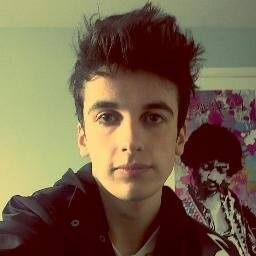 His guitar playing taps into the synapses like lightning. Blues remind me of something burning. In the hands of an expert like Chris King Robinson, this will ignite your mind like cinders. His Psychedelic Blues/Rock Jam led me to other tunes. Most of the time he plays alone. Sometimes with a partner or a recorded track playing in the background.

He covers artists like Jimi Hendrix, Stevie Ray Vaughan , Rolling Stones and a lot more. His youtube channel has around 60,000 views per video on an average. He is approaching 800,000 likes in his twitter page. He started playing this style of music as a child and chronicled his progress as early as age thirteen.

I see that he is also a gear head. He usually plays the following:

Sound s like a good handful huh? Chris King Robinson lives in Peterborough , East England. You can follow his music through the following:

You can download hi latest single  Lipstick on Her Cigar via iTunes: http://t.co/WyGxBz4nLz