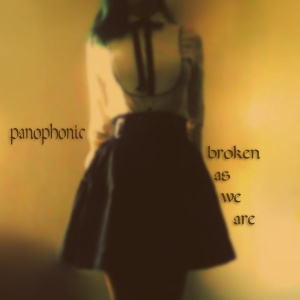 Broken as we are
by Panophonic

That cool indie label Patetico Recordings has released another album that will turn dream pop heads. Broken As WE Are is the new album by Panophonic. It still has that same ‘analog flavour’ as the other Panophonic albums. This means that when you listen to the songs, each one sounds like it’s from a cassette table released in the 80s. And I think that’s the kind of sound the band have tried to emulate since their first album. I think this work. There are those of us who have this nostalgic cravings for all things 80s.

The album starts with a slow track called Your’s to Keep. This one ends with a great electric guitar solo. Served Cold follows with this great drum pattern. It’s raining outside and this is a good soundtrack. If you like early 80s Goth stuff then you will appreciate this one. Especially if you are a big fan of The Joy Division.

The title track Broken as We Are sounds trippy. In fact it reminds me of any Siouxsie and the Banshees song from the late 80s – early 90s. They exploit dissonance in a good way adding something to the bare atmosphere which feels like you are walking in an abandoned warehouse late at night. Nothing Left is quite a surprise as it uses the keyboard as the accompaniment. You would not suspect the singer is American than Brit. The somber melody can really haunt your dreams like any scene from a Sandman comic book.

Understanding Emptiness has that hypnotic drum beats. Perhaps they are channeling The Cure. This is another ‘thriller/suspense’ candidate for any TV series. You know where the main character looks like Johnny Depp in Edward Scissorhands. Haunt My Dreams is too dissonant for my taste but I am sure when you are in the mood for something dark and depressing then this will suit you. Sweetness and Light is another slow scorcher that borrows heavily from Ian Curtis/Joy Division style, while Until the End takes you out from your stupor into a slow dance under the rain. The keyboards are like flapping butterflies tugging at your pained heart.

The Great Manipulator is another nod to the great Gothic/New Wave bands of years gone by. The upbeat As I Rise closes the album. Broken As We Are is a satisfying musical journey into moods, feelings and decades. This is potent and beautiful , all from the awesome Panophonic.