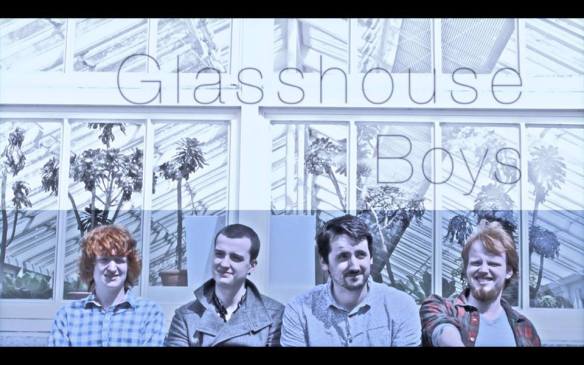 The fantastic lads of Dublin based folk band Glasshouse Boys have a surprise interview! Bassist Bala Blake took the keys to represent the band. In the midst of the Polar vortex that’s hitting the Northern part of the globe, these musicians are keeping us warm with their tunes.

1. Can you describe Ballyfermot where you came from?

We all come from different parts of the country, Sligo,Wicklow and Dublin, we all met in the contemporary music performance course in Ballyfermot College of Further Education, Ballyfermot is a working class suburb of Dublin City.

2.Any important project(s) you are working on as of the moment?

We are actively gigging in the Dublin scene see our facebook page for news on upcoming gigs.

4. Who writes the songs and what’s the process?

Brendan writes the songs and then he brings them to the band, where they are arranged and finely tuned to suit the band set up.

5. Do you think folk music is stronger than ever?

Folk music is stronger than ever, it has gained a lot of attention in the Irish scene with festivals like Spirit of Folk and Jack of Diamonds, also there are many fantastic home grown folky type bands on the scene at the moment such as The Eskies, The Cujo Family and Gypsy Rebel Rabble.

6. What do you plan to accomplish as a band?

As a band we hope to play a large amount of live gigs and develop a strong live following, record and release our material and have fun doing it.

7. How did you all become musicians?

We all became musicians through love and interest of music, we all took different approaches to it but the end result was the same.

8. Where can listeners buy/download your tracks?

Our tracks can be heard at https://soundcloud.com/glasshouseboys

They create songs with changing moods like the dynamic sunlight on Irish landscape. They are based in Dublin. They call their music: “Findie” (Folk-Indie). Major influences include Bob Dylan, Pixies, Neil Young, Pokey Lafarge and Jack White. Brendan Carvill is the guitarist and lead vocalist. His sunny voice calls to mind 60s and 70s singer/songwriters. I guess Neil Young is a good reference. But his Irishness always comes through and that makes his style really unique. Conor Black plays the guitar and mandolin. Listen to their song “Her” and you will hear a great amount of mandolin glory there. It is also present in “Songbird.” Bala Blake keeps the tunes solid and ‘large’ with his bass. And last but not the least, Nimai Blake keeps the tempo alive with his skins.

I feel they are destined for bigger things. You can really spot that in their originality and the attitude of their music. If you like Bluegrass and Irish folk then this will appeal to you. If you just love music for its sake then you better listen to this one because this is the way songs should be made.

Thanks to singer/songwriter  Rachael McCormack for sharing this band via soundcloud.