When you feel like drifting away from who you used to be, then in time music will help you find your way back. In life, little and big tragedies can lead us astray, sending us to a journey that seems to go on and on, like lost astronauts in space. Sometimes the journey is so fascinating it changes us and takes a huge chunk out of our hearts because our survival depends on it. We change and therefore our relationships change. We no longer interact with the people we used to talk to. But at the back of our minds we lament that end to the world we used to love and know. Then something new yet familiar pulls us back.

This is the feeling I get when I listen to the new release of Panophotic. The album is called Endlessly. The album mood sort of reflects the epiphany I am writing about in my previous paragraph. Tom Lugo has a knack for writing poetic song titles like: Summer is at an End, I Can’t Come Home, Fade Away and many more. Although the music defies categorization, it still owes its loyalty to modern rock stylings, dream pop  with Gothic flourishes. The lyrics are introspective, with nostalgic leanings on emotive 80s post-punk.

Overall, this is a kind of album you would be listening to when you wake up early at 2 in the morning but it is too dark to ride your bike. I love the use of hypnotic guitar distortions and melodic synths. There is also an aural consistency from beginning to end as all tracks sound cohesive even if they don’t sound the same.

Endlessly is a gift from a heart of experience. Here, we witness the depths of pain and ecstasy that can only come from weathering any storms. Life is pain but somehow we must go on because our confessions are pillars of strengths that young hearts can rely on. Because in the end, music can be our anchor in the seas of uncertainty. 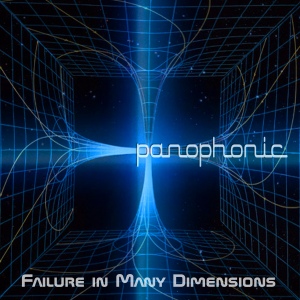 As Halloween creeps up it is great to have a companion soundtrack. The sumber beauty of Panophonic’s Failure in Many Dimensions reminds me of old Joy Division and Cure with that guitar and synth sound. There are six songs and the EP has a (in my opinion) a fantastic artwork. Failure in Many Dimension is released by Patetico Recordings which is an independent  label and promotional company based out of Philadelphia. It is the same label that brought us great music from bands like Under the Wire, Stellarscope and ShiShi.

This is a follow ep to their fantastic EP Sounds of Desolation. Although the arrangements vary per track and the approach evolves per release, you can always expect somber melodies and atmospheric synths from Panophonic. After all these are the things that make their sound unique.

The EP opens with In You I Want to Swim which is a haunting song reminiscent of 80s New Wave/Goth Rock music. What Do You See is mind blowing in its simplicity. The pulsing beats are gorgeous. This brings me to shoegazer heaven. All the tracks in this EP pay tribute to dream pop if you love that style of music. The guitars are ethereal. The singing, sublime. Give it a listen to bring smile to your face despite its somber mood.

“Hello. I am proud to present to you my new single Northern Soul. This is my first release since I released the ‘The Golden Age’ last year.” Joel Sarakula

Joel Sarakula is a singer/songwriter from Australia who is now based in the UK. This is a new single which will be included in a new album which will be released next year. I don’t have the information as to the title but I know anything from Sarakula is worth a listen! I just left a message to his fanpage saying ‘this is a smile inducer!”
***
People of Pictou Country: Layne Greene

Layne Greene geared up to release an album next year.

Got this from People of Pictou County:

He’s a musician. When he was four years old, his mother put him in piano lessons. It wasn’t long before he discovered his love of music. Over the years he’s played guitar, piano, and dabbled with a few other instruments.

But there is one instrument that means the most to him–an acoustic guitar. It’s not just any guitar, though. His grandmother shares his love of music, and one day about 50 year…s ago, while his grandparents were camping, they came across a gentleman playing a guitar. His grandmother wanted it, and his grandfather was willing to buy it. Some bargaining, and $13 later, his grandmother had the guitar she wanted. They kept it, but years passed and it started to collect dust. A few years ago, this young man discovered the old guitar in his grandmother’s closet. He knew it was special, and he wanted it.

The guitar was in need of serious repair, but he saw the potential. When he graduated from St. F.X. he decided to fix the guitar as a present for himself. Just as he’d known, it was an amazing guitar and he’s been using it ever since.

And he’s used it well. Today he has music that has been listened to over 52 000 times online, played numerous concerts, and he’s about to release his first CD.

Watching him tell the story, I couldn’t help but notice how much his eyes lit up. A simple guitar, purchased on the spur of the moment during a camping trip, had been handed down to the best possible person. Someone who saw treasure and memories in a $13 guitar.

***
Got this while perusing the web:
Annual UK vinyl sales set to crack the one million mark for the first time since the mid-’90s – FACT Magazine:

I am a fan of Tom Lugo. This guy has several projects. He also owns Patetico Recordings that caters to indie bands. He has many styles so it is hard to point out a definitive one unless you are talking of specifics relating to a band  he is part of. But most of his guitar styles can be associated with the dreamy, dream pop sound of  The Sundays, Cocteau Twins and The Smiths. He also does martial arts so never mess with this guy when he is playing music or he will kick your arse. But hey, Tom is the nicest guy I know. It is hard not to get enthusiastic about the things he does.

Sounds of Desolation is a collection of instrumental songs with the word ‘chill’ written all over them. I am listening to this album at 5.a.m. Not a bad thing to wake up to even when you are caffeine-deprived. I have many favorites. Abiotic Factor tops my list with its beat and guitar style. I think I don’t mind that the majority of mainstream music is crap these days. Because there will always be bands like Panophonic to save the day. And mainstream music is NOT the only option you have.

Bliss is an interesting concept when made into an album. Bliss about finding someone and spending you life with that person. It could be a sense of contentment when you have finally found what you are looking for. And it is a personal thing. This is the subject of this interview as Tom Lugo of Shishi finally opens up his ideas behind the creation of Eternal Bliss, a full length album by Philadelphia based duo of  husband and wife Tom and Jaimie Lugo.

What’s the inspiration behind the title Eternal Bliss?

What’s the inspiration behind the title Eternal Bliss? It’s a line in our song Bliss featured on the album. Being married for quite sometime and sharing our lives together is eternal bliss.

I swear the tracks off this album would fit well in the TV series The Walking Dead because of the doom and gloom style. But the songs are also beautiful. It’s like holding the most fragrant black rose. Who are Jamie Lugo’s vocal influences?
Shirley Mason, Gwen Stephanie, Debbie Harry are the influences for her vocal stylings for this record.

Anything for You is my personal favorite because of the lyrics and the melody. What’s the story behind this song?

I wrote the song for Jamie, it’s how I feel towards her. Many of the songs are about our lives and situations we have lived through.

I love Shirley Manson and the band Gabage and the rest of the female vocalists you mentioned and I guess that’s one of the reasons why I like your sound. Will there be an official music video soon?

Yeah, I love Shirley, Debbie, Gwen, Jamie as well…lol We have 3 videos out so far. One for Anything for you, our daughter is the model in the video:

We have a video for Season of the Bitch which features our daughter:

A video for the song Bliss:

Hopefully we’ll be shooting another one soon.

You mentioned you’ve been playing live.Is this something to do with promoting Eternal Bliss. Do you plan of releasing a live album too?
Well, I play live some of my other projects (Panophonic, Under the wire, Stellarscope) but we have not had the opportunity to perform under ShiShi. Hopefully by the end of the summer or sometime in the fall we’ll have some live gigs happening. So, we’ll have to see about a live album.

Tom Lugo and Martial Arts…can you expound on this a bit and how to you reconcile the two: music and martial arts.

I have been an martial artist all my life, it is not what I do but part of who I am just like music. in order to become proficient in martial arts you have to be patience, humble, grounded, and persistent all qualities that transferable to being a musician and artist.

Where can listeners buy your songs(that means all of the side projects as well).

The album is currently on sale (Release date 06/11/2013) at bandcamp for $6 http://pateticorecordings.bandcamp.com/album/eternal-bliss . The release will it will be available on CD through Amazon and Reverbnation in the next couple of weeks as well as through all major download retailers like Itunes, Rhapsody, Napster, etc.

How do you see 2013 opening up to your music? Plans?
With an over saturated music market it is hard to get your music heard, so our hopes are to gain a solid following of fans and continue to write and record more music. We also have plans of playing out but that most likely will not happen until later on this year.

What are your top 7 albums this month?

Shishi:
Jamie – Vocals
Tom – everything else