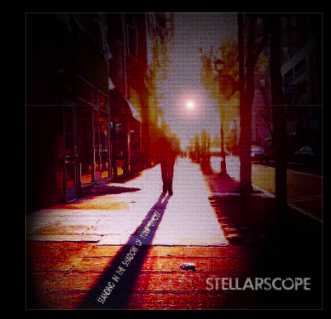 Pain, loss, and fear have never been so beautiful as captured musically by Philly indie rockers Stellarscope. If you love albums by Joy Division and The Cure(in the early 80s) then you will love the mood of “Standing in the Shadow of your Ghost.” For me it is fitting in this rainy night. The synths are spacey and the drums are robust. Basically, this album is the creative output of two people:  Tom Lugo & Bob Forman. You can tell that hours spent writing and recording together gave us this trippy output.

Most of the tracks are mid-tempo which is good for background music for dim lights and a book in hand. There are also danceable tracks like Only Strangers Now which calls to mind the late and great Ian Curtis. The gothic brooding of Tom Lugo’s voice and the hypnotic drums of Bob Forman create an almost beautiful form of revelation.

The power of “Standing in the Shadow of your Ghost” is in its craft. The quality of the recording is already evident in the first track and even though there is no darkness in your horizon, you will appreciate this for its creative strength.

The album closes with How it Ends with its oceanic soundscapes. All things must come to an end. Love, no matter how fervent can sadly end. In this sad times of instant gratification, Stellarscope remind us that you can take your tragedy and make it into art. And while we quietly weep for the ghost of our pasts, helpless to the obstinate hands of time, that aching and bleeding part of our humanity refuses to move on yet. Because our stubbornness to hold on to meaning is what makes us human after all.

Yup, nothing could represent the power of indie music that Philadelphia’s own Stellarscope. They are back with a new album called Shades of Sadness and Sorrow. They are improving on the sound that defines them as a band: a combination of 80’s post punk, dream pop and Gothic atmosphere.

The recording is so lo-fi you would think you are listening to a cassette tape from some obscure 80s band. And that’s the way I like it. In a way it is a trip to the bast while at the same time the subject is very much relevant to what’s going on in the world. The vocals sound like they could have been recorded inside an abandoned factory as you can notice in the echo.

Dug this Hole greets us with its energetic style plastic through speakers. Perhaps this might be the band’s carrier single. We will see. It is hard to choose which track stands out. There’s Never Hated Like This (which I can personally relate to following the tragic personal events in my life three years ago). Although I think Living in a Haze is my favorite of all. I love the hazy guitar sounds that encircle the song creating a plasma of stellar radiation amidst the pulsing rhythm.

Farewell sounds like an intro from either a Sioux’s or old Cure song. I don’t know how to describe it…but classy could a fitting word. The Mansonisque Eat Your Heart Out sounds a bit chaotic but the drums are crunchy like spicy peanuts. After the aggression and robust sounds of the previous tracks, It’s All Gone Slows the pace. The glorious guitars of Soul Disturbances reminds me a bit of Bauhaus especially that the singing is unmistakably Peter Murphy. I love it! Face the Dirt closes this carousel ride with high notes.

Stellarscope proves that what is beautiful about rock in the 80’s is here to stay. And it is a joy to be showered by music like this at a time when everything feels bland. 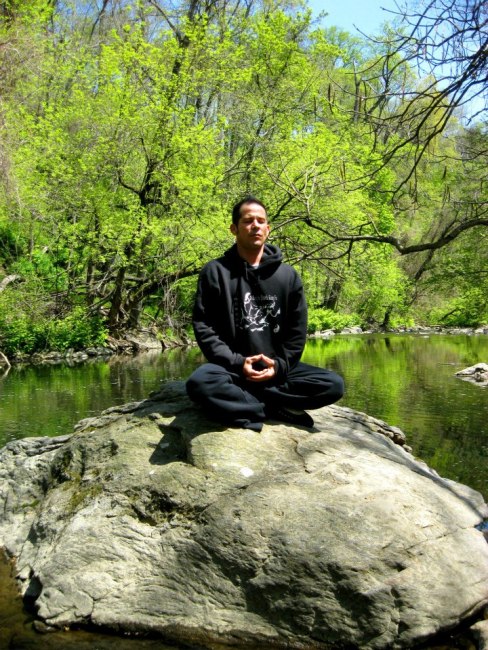 Bliss is an interesting concept when made into an album. Bliss about finding someone and spending you life with that person. It could be a sense of contentment when you have finally found what you are looking for. And it is a personal thing. This is the subject of this interview as Tom Lugo of Shishi finally opens up his ideas behind the creation of Eternal Bliss, a full length album by Philadelphia based duo of  husband and wife Tom and Jaimie Lugo.

What’s the inspiration behind the title Eternal Bliss?

What’s the inspiration behind the title Eternal Bliss? It’s a line in our song Bliss featured on the album. Being married for quite sometime and sharing our lives together is eternal bliss.

I swear the tracks off this album would fit well in the TV series The Walking Dead because of the doom and gloom style. But the songs are also beautiful. It’s like holding the most fragrant black rose. Who are Jamie Lugo’s vocal influences?
Shirley Mason, Gwen Stephanie, Debbie Harry are the influences for her vocal stylings for this record.

Anything for You is my personal favorite because of the lyrics and the melody. What’s the story behind this song?

I wrote the song for Jamie, it’s how I feel towards her. Many of the songs are about our lives and situations we have lived through.

I love Shirley Manson and the band Gabage and the rest of the female vocalists you mentioned and I guess that’s one of the reasons why I like your sound. Will there be an official music video soon?

Yeah, I love Shirley, Debbie, Gwen, Jamie as well…lol We have 3 videos out so far. One for Anything for you, our daughter is the model in the video:

We have a video for Season of the Bitch which features our daughter:

A video for the song Bliss:

Hopefully we’ll be shooting another one soon.

You mentioned you’ve been playing live.Is this something to do with promoting Eternal Bliss. Do you plan of releasing a live album too?
Well, I play live some of my other projects (Panophonic, Under the wire, Stellarscope) but we have not had the opportunity to perform under ShiShi. Hopefully by the end of the summer or sometime in the fall we’ll have some live gigs happening. So, we’ll have to see about a live album.

Tom Lugo and Martial Arts…can you expound on this a bit and how to you reconcile the two: music and martial arts.

I have been an martial artist all my life, it is not what I do but part of who I am just like music. in order to become proficient in martial arts you have to be patience, humble, grounded, and persistent all qualities that transferable to being a musician and artist.

Where can listeners buy your songs(that means all of the side projects as well).

The album is currently on sale (Release date 06/11/2013) at bandcamp for $6 http://pateticorecordings.bandcamp.com/album/eternal-bliss . The release will it will be available on CD through Amazon and Reverbnation in the next couple of weeks as well as through all major download retailers like Itunes, Rhapsody, Napster, etc.

How do you see 2013 opening up to your music? Plans?
With an over saturated music market it is hard to get your music heard, so our hopes are to gain a solid following of fans and continue to write and record more music. We also have plans of playing out but that most likely will not happen until later on this year.

What are your top 7 albums this month?

Shishi:
Jamie – Vocals
Tom – everything else