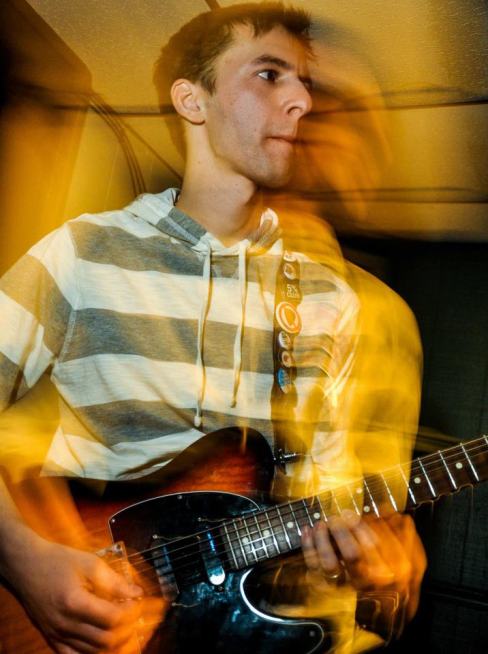 Meet our featured artist Dane Di Pierro. He is also the brainchild of experimental noise pop/space rock band Radiolab whom you have read about in my earlier post. This interview is essential to other musicians because of the wealth of musical information that Dane shared with us. I am always curious about the kind of music that musicians listen to in their spare time so you will find out the bands on top of his playlist. So read along my dear readers and put Radiolab on your list of the important indie bands of the year.

1. Was it a challenge to sculpt the songs in Radiolab considering that bands no longer make music like that. People seemed to prefer simplicity over complex layers of sounds.

Some songs came together rather quickly and easily and others have gone through quite a few different arrangements. I have a backwards way of working. Most of the songs start with a simple drum or synth loop and I just add different things until it sounds right. It makes a editing a challenge and I’ve come to hate that part. Only “Emotive” was written just an acoustic guitar.

2. How did you venture into music making?

I started out playing bass in a grungy type band when I was 18. Our singer got into some drug problems and often wouldn’t show up for practice so we spent hours making experimental music and recording everything. After I moved to Maryland I bought some recording gear and kept going. Over the years I taught myself new instruments and drum programming in order to get new sounds.

3. Please share your musical heroes and how they influenced you

Nick McCabe is a huge influence on my guitar sound and his band The Verve was my introduction to shoegaze music. Also, Johnny Greenwood (Radiohead) cause he’s a musical jack of all trades. He made me want to take up the synthesizer.

4. What are the top 5 albums you are listening to this month.

You can probably hear bits of Radiolab ripping off each of these records.

5. Ok let’s discuss gears. What are the studio gears you are proud of?

I guess I’d be most proud of the Moog Voyager OS, cause it was hard to find and hard to figure out what each of the little knobs do. Most of the really wild sounds come from that gadget. My ’92 Telecaster Plus is my go to guitar which I use through a Mesa Stiletto. The Roland Space Echo gets used a lot too. My friends will tell you I have an effects pedal addiction. The drums are all from Reason 4 or FL Studio 7 and occasionally filtered through a Korg Koass Pad.

6. You both have the knack for choosing interesting song titles. What’s the story behind The Objectivist which happens to be my favorite track in the album?
I was looking for good samples to set to that song and I was reading Atlas Shrugged at the time. I felt the interview with Ayn Rand and Mike Wallace captured her living out that philosophy for the audience. Rand is a controversial figure but whether or not you agree with her, she’s been influential in our culture and I tried to get the essence of objectivism as best I could into a 4 minute song.

7. You strike me as the kind of guy whom I could talk to for hours covering history, religion, film and literature. Do you consider yourself an erudite?

Not really, I try to be well rounded though and keep up to date on what’s going in the world. I just started reading a lot more in the last year and a half, but I do love movies. Especially documentaries.

8. How’s the promotion going for Radiolab?
It’s tough for a DIY band trying to get people to notice your music, but the responses we’ve gotten so far have been positive. Most of our promotion has been oriented towards blogs and college radio. Blogs like this one have been a big help. We’ve gotten some label interest now so maybe we’ll have some more help soon.

The record is available on most sites that sell digital music. iTunes, Amazon, Rhapsody are the big ones. We also have a bandcamp page at http://radiolab.bandcamp.com

10. It’s been three years with four albums to boot. How do you continue being creative?
I get inspired hearing other bands all the time. Maybe it’s a cool effect, or a certain sample, but I look for different ways to combine those elements into new music.

Misc
Fave film: I like crime movies like “Reservoir Dogs” and Guy Richies’ early films “Lock Stock & 2 Smoking Barrels” or “Snatch”. I can’t pick just one, they all have great dialog.
Pet peeve: Flakey band mates. In general anytime when you’re committed to something and being held back by others who don’t care.
First musical experience as a child: My Dad playing Steely Dan tapes while driving me around as a kid. He was always drumming along on the steering wheel.
Zodiac sign: Aries
Fave place to go: Queenstown, New Zealand. I went there on my honeymoon earlier this year. I hope I make it back there someday, it’s a beautiful place.

Every author has a certain style in writing that makes him or her identifiable from the rest. Just like in music. You know exactly what band is playing because of a certain sound they have. The Last Busker in London and Other London Tales is a beautiful introduction to the writing style of Scottish author Garry Crystal. Reading Crystal’s prose is like flipping through the journal of someone even though you were told not to spy. He makes each of his stories so personal and believable it feels like you are reading the work of someone you know. And sometimes, you feel as if you are reading about the scenes in your life you dare not wish to tell someone.

This collection  starts with the story of the same title. Here, Cal(written in the first person as most of his stories are) takes a drinking spree on a Christmas eve only to end up in a terrible fate involving three crooks. It is both a cautionary tale and as an excursion into the fact why we sometimes do things that in the end will destroy us. Here, Cal muses about illusion of happiness we sometimes cloak our lives, while deep inside we are really sad: ” The disease only becomes terminal when you don’t realize you are alone and you become used to the silence and look forward to it when you get home at night.”

Crystal  has his stories always surrounded by interesting characters. In Sunrise in the City, Cal meets a friend who gets him into trouble, dumps the car and then runs away leaving him to fend for himself. Crystal’s tone is unapologetic, even brutal but always reflective. He describes every emotional scar we all experience as a sort of cautionary tale. Sometimes as a release.

The Last Busker in London and Other London Tales is something I can read again and again, just to remind me how dull life is without the zany characters around us. And also to remember that in the heart of our quiet desperation lies a seed. And that seed is an art in which Garry Crystal has polished and made beautiful.

My big thanks to Dean Walker for recommending and giving me this beautiful gem of a book. It’s also my Christmas gift!

The Drugs Don’t Work by The Verve is one of the songs that appeared in the book.